Do It Yourself Soil Amendments

Here we discuss and show what it has taken to improve our soils.

Growing plants is a difficult challenge for us since our soil is rated as poor for crops, does not hold nutrients, and does not hold water. Furthermore, it reacts sharply to acid in the presence of water, especially our acid rain. Rain blanches the color out of our plants by washing nitrogen out of the soil and increases acidity. This causes flower buds to die and drop, and seed pods to abort.

This has led to the necessity of much watering, and to the addition of much lime and fertilizer. It has been very difficult to learn just how much and how often to add lime. Because we have been on a shoestring retirement budget, we could not afford expensive soil testing. Thankfully our county pays for two tests per year. This helps, but it is not enough.

Historically, this land was cleared about 1720 by the Brook Hill Plantation. Tobacco was grown here until emancipation in 1864, when farming was abandoned and it returned to forest. Our home was built here in 1937. Since then most of this land has been lawn. The few trees on the property were removed about 1982. It is a full sun site.

We came here in 2000 and slowly took up the gardening. By 2007 we were tilling up lawn for daylily beds. But growing things well has been a challenge. Winter time was for study. How could we improve things?

As we learned soil science and good practices, we took up mulch, then composting, then vermicomposting using worms. The first beds we built with a lot of compost have done much better, but compost must be renewed every year to get the effect.

As we studied soil sciences we learned about biochar, and took up the challenge of producing biochar and adding it to the gardens. This is a work in progress, and as of this writing we have not yet seen the garden results. See the blog post on biochar for more information. 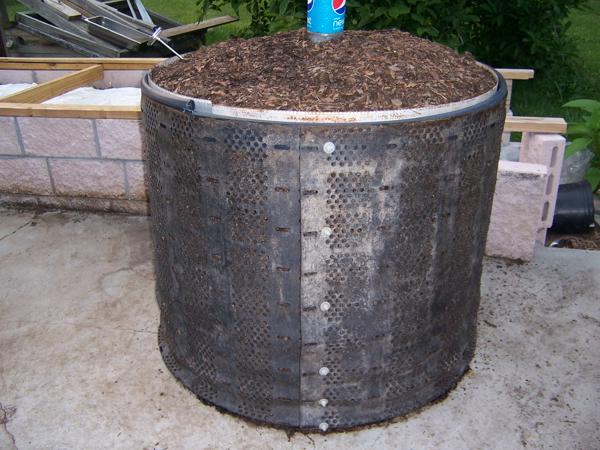 This 270 gallon bin usually processes a mix of shredded leaves, garden waste, coffee grounds, horse manure and if available, chicken manure. After reaching 150F twice, it is cooled and fed to the worms after this turning. Hot compost is merely for the purpose of killing seeds and pathogens. Worms do the rest, saving me the work of multiple turnings until the compost is fully broken down. By reducing the time compost is in the hot bin, less nitrogen is burned off in the form of methane gas. Worms actually increase nitrogen in the compost as they digest it and add nutritional value. 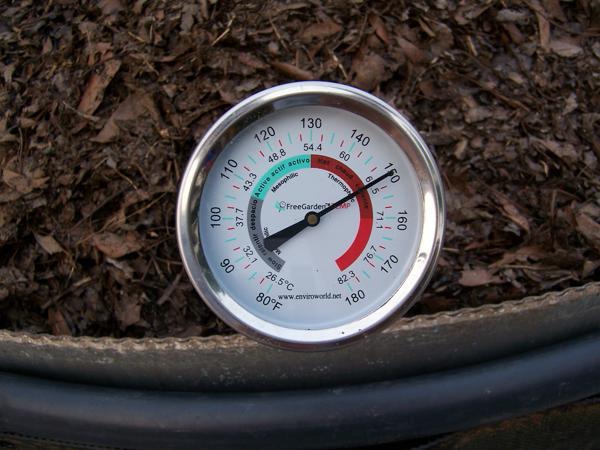 The readings on the thermometer indicate three different types of aerobic bacteria that work at different temperatures. The monophylic bacteria start the process until it reaches about 105 F degrees. Then the mesophylic bacteria get started and take the temperature to about 130 F. Above that thermophilic bacteria go to work. We filled this bin on June 4, 2015 with shredded leaves, garden waste, coffee grounds, and horse manure. We turned it on June 8 when it reached 140 degrees. We turned again June 11 at 150 degrees. In each turning about 70% of the product reaches temps above 130F. This process kills seeds and pathogens. All product is further processed by worms, and then is put in the garden soil nearly weed seed free! This compost cycle is repeated every 6 weeks to keep the worms well fed and to produce abundant worm compost. 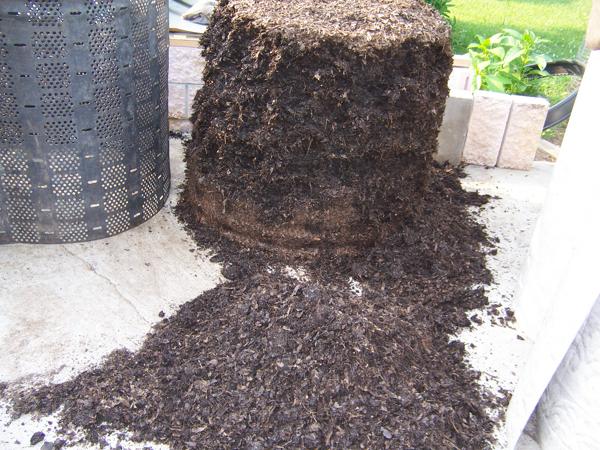 The container is taken off and set for refilling. The outside material that did not get hot enough is taken off, set aside, and added later to the middle or above inner part of the bin. The previous bottom which was cooler, now becomes the top and will achieve 150F. It takes about 45 minutes to turn this pile. Since it is on a concrete pad the cleanup is easy and no product is lost or polluted.